Mental Health Stigma, or, Why We Should Leave Amanda Alone 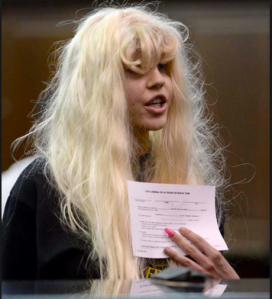 The inevitable has happened: Amanda Bynes has been put under a 72-hour psychiatric hold in LA. Her parents are seeking conservatorship of her affairs after over a year of bizarre behavior, most recently in the form of some severe Twitter allegations* about her father abusing her as a child, and a tweet recanting her statement and blaming it on a microchip her father had implanted in her brain. This is a familiar story. One can easily remember Britney Spears going through similar issues, attacking paparazzi with an umbrella and famously shaving her head. Or Lindsay Lohan, landing in court case after court case, and suffering from substance abuse. But it’s all too easy to forget that these celebrities are people, and they are going through (or have gone through) some mental health issues. And so have a lot of people.

Mental health diagnoses can be things like phobias, anxiety disorders, eating disorders, depression, substance abuse and schizophrenia. According to the National Institute of Mental Health (NIMH), in 2012 approximately 4.1% of US adults were suffering, or had suffered, with a serious mental illness within the last year. That might sound small, but that only accounts for a serious mental health diagnosis. The same year approximately 18.6% of US adults had suffered from mental illness in general. That’s almost 1 in 5! So, in reality, what Bynes is going through is a common experience, and she doesn’t deserve increased scrutiny about her mental health state just because she’s been in the public eye since she was seven.* * Let’s make like Britney and leave Amanda alone.

There’s a well-known relationship between stress and mental disorders. Obviously, the attention a celebrity receives is bound to be stressful, but sources of stress can range from your job to childhood abuse. Some illnesses even appear to be more common in populations of people who experienced some type of extreme or chronic stress (1,2). Working full time and juggling school from a young age could definitely act as a source of stress, which may help to explain the incidence of mental disorder in people who were child stars (and, similarly, in impoverished populations; 3). Clinicians believe that something called the gene by environment interaction (G x E) plays a large role in mental illness (4,5). Basically, it means that even if you have some sort of hereditary vulnerability to a mental illness, it may take environmental stressors to actually end up developing the disorder. Illnesses like Post-Traumatic Stress Disorder (PTSD) may be especially impacted by environmental factors. Soldiers deployed to Iraq during Operation Iraqi Freedom had a PTSD prevalence rate of 19.3% (6). Mental illness may ultimately be something that is brought out in us by our circumstances, rather than something that we “have.”

Regardless of how people come to be diagnosed with a mental disorder we know that mental illnesses are just as debilitating as physical ones. People living with mental illness may suffer from symptoms ranging from anhedonia and rumination, to things like delusions and suicidal thoughts. In fact, according to the National Alliance on Mental Illness, 90% of the people who commit suicide have received a mental health diagnosis. One of the reasons may be the amount of stigma that surrounds mental illness. Stigma can reduce self-esteem and opportunities to be social, and increase stereotyping and prejudice (7). There is also evidence that populations that endure prejudice are more likely to develop a mental illness, illustrating the complexity of the G x E interaction (8, 9, 10).

So let’s give Bynes’ bizarre behavior a pass. If she’d been diagnosed with cancer, people would empathize with her and leave her alone instead of hounding her and putting her in the spotlight. Mental illness is just as serious as any illness a person can have, and it’s past time we learned to see people beyond their maladies, regardless.

*Anyone who knows me well will know how much it pained me to write the phrase “severe Twitter allegations.”

**Ok, ok, she was 8 in this one. Sue me. I didn’t have the energy to deep Google it. I also totally had those Barbie™ hair extensions.

Early last week, a video was released of NFL player Ray Rice knocking his wife out in an elevator, moments before he dragged her unconscious body across a hotel lobby. Many people are quick to point out that Janay Rice doesn’t consider herself a victim, and that she married him after the incident occurred. Still more say she would have left him if he was really abusive. But research shows that people in abusive relationships stay for complex reasons. Rusbult and Martz demonstrated that women who were more invested in their relationships were more likely to return to their abusive partner (1). Dutton and Painter showed evidence for traumatic bonding theory: the idea that intermittent abuse creates extremely strong attachments (2). And Strube and Barbour demonstrated that both commitment level and economic dependence are related to decisions to stay or leave (3). With overwhelming scientific evidence, we know that combining love and violence is rarely black and white.

Working against justice in our “Just World”

“If this is the best of all possible worlds, what are the others?”- Voltaire, Candide

Back in 1759, Voltaire wrote a rich satire of 18th century society, unleashing his sharp wit on issues from religion to philosophy. One of the many lasting criticisms brought to light in this classic work is that of the just world phenomenon: the belief in some cosmic fairness, and thus, that people tend to get “what they deserve.” The just world phenomenon manifests itself all the time.

People often equate the need for public assistance to laziness. When talking to coworkers about their skills, we often reassure them that if they work hard, they will get the recognition they deserve. And when unarmed black teens are killed on the street, people often assert that they probably “had it coming.” Voltaire had great insight into our violent and optimistic nature: we are unlikely to see undesirable events as random because it’s scary, and it’s a slippery slope from optimism to ignorance

Case-in-point, system justification theory predicts that people are motivated to hang on to the status quo, and will often defend the current system regardless of its disadvantages. Some researchers have attributed this effect to a desire to defend one’s self-concept or group identity against threat (2,3). But there’s also evidence that people do this when they are the very ones at a disadvantage (1).

For instance, in the days following Mike Brown’s August 9th shooting, I saw my first “Pull Your Pants Up Challenge.” This video by Malik S. King is a great example of system justification at work. I doubt the men participating in this challenge actually believe that shooting someone because of the location of his pants is justifiable, but the assertion that black people can dress differently to avoid negative consequences smacks of the old revealing clothing rape justification argument. These videos demonstrate how powerful and how pervasive system justification is.

So, why are people defending the system? Perhaps it is because it is too threatening to think that we have law enforcement officers on the streets who do not make lethal force decisions objectively. Perhaps the young black men doing the pants challenge want to believe that they have some control over whether or not the police will shoot them. But sometimes we must face the reality that not all actions make sense. We do not live in the best of all possible worlds.

One of the main aims of experimental social psychology is to study phenomena that apply to real life. That application is sometimes applied, but often it is simply educating individuals about their own behavior and motivation. I believe the just world phenomenon and system justification theory speak to the latter mission. By knowing that we are cognitively motivated to believe that the world is just, and that we often advocate for existing systems despite fatal flaws, we can be critics of our own cognition, and work toward bringing more justice into our just world.