Women and sexual harrassment: They just let you do it 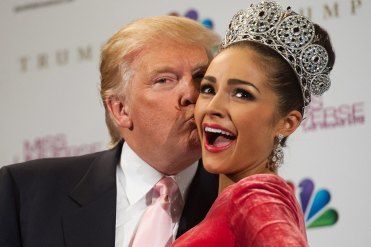 It’s safe to say election 2016 is in full dumpster fire mode. Donald Trump’s comments on the leaked tape released last week were shocking coming from a presidential candidate, yet they weren’t that shocking to a lot of women. Michelle Obama gave a speech today explaining why. Describing every woman’s experience, Obama talks about how women are used to men treating us as lesser beings, because we see it everywhere from the classrooms where we’re educated, to the strangers catcalling us on the street.

Her speech reminded me of an experience I had working for a man with a serious Napoleon complex when I was 19. The man might as well have been a small statured Donald Trump. I was a hostess at a popular restaurant, and I was required to wear heels while I stood for 8 hour shifts. The one time I dared to wear a cardigan, I was told to take it off and never wear it again because I didn’t look “as fuckable as usual.” My boss would watch me on a camera and call me every time he didn’t approve of my behavior. Why hadn’t I fluffed the pillows if no one was there? Why was there a napkin on the floor in the bar? Why did I leave the host stand to get a napkin off the floor in the bar? I was always being watched, and it made my skin crawl. Before I walked out of that job after a bout of verbal abuse, he said that he thought I’d make a good waitress, and if I wanted to come back next summer, he’d love to have me. I smiled and thanked him for the compliment, but, inside, I felt gross. The man had yelled at me and belittled me all day for a job that mostly entails leading people to chairs and talking like a human person, and not only did he think I’d want to keep working for him, he thought that he was being nice to me. And you know what? I never told that man how I felt about how he treated me. He was my boss, I was 19 and he was in his 40s, I was a hostess and he owned the restaurant. I sucked it up. I said nothing. And I feel ashamed about that, because that man continued to treat people that way, thinking no one had a real problem with it. When you’re the boss, they let you do it.

Why don’t people tell others how they really feel about things that they said or did when it happens? Social psychologists explain this with the person by situation interaction.1 It basically means that people bring themselves into situations, but then they sometimes behave unlike themselves due to those situations. While I would call out a friend for sexist and abusive behavior or language, I wouldn’t do it in the workplace, to a man with all the power when I had none, or even to a coworker I had to see regularly. The truth is, a lot of people’s behavior really is driven by situations that they are in. Do we become totally different people? Absolutely not. But do we sometimes do things and then wonder why we did them? Ask the 5 cookies I just ate. Yes. We do. So while people may behave out of character occasionally, maybe your usually loyal partner starts a flirtation with someone else, or a good friend says something not-so-nice behind your back when other people are talking about you, a pattern of such behavior is telling.

People often make the fundamental attribution error about other people’s behavior, which means that they assume that the behavior is indicative of the person’s dispositional characteristics, who they really are inside. Luckily, there is a way to determine if someone’s behavior is a demonstration of their true personality, or if it was influenced by situational factors. According to Kelley’s Attribution Theory, or Kelley’s Cube2, you can ask yourself 3 questions:

What worries me, and many women, is that Donald Trump’s behavior makes it clear that he really feels exactly like Michelle Obama said. This is who Trump really is, and it’s gross. He is every boss that ever stared at your ass on a closed circuit camera, he is every man on the street that thinks his evaluation of your physical characteristics is so important for you to hear you should take your earbuds out, he is every guy who buys you a drink at the bar when you said no and then gets mad that you won’t talk to him because he bought you a drink. Women see you Donald Trump. We don’t let you do it. We just feel like we can’t say no. And to answer the question you keep asking, we actually have a hell of a lot to lose.

Let’s talk about privilege. White privilege. Male privilege. Class privilege. Straight privilege. All of those categories of people’s identities that dictate how they experience the world, whether they like it or not, and of which there are many more. We often think about privilege from a sociological perspective: institutional racism/sexism/other -isms, and limitations and expectations imposed on people by mainstream society. But what if we thought about privilege through a psychological lens? Specifically, what if we considered the role of the individual both in perpetuating and recognizing unfair privilege in society?*

This summer I taught Social Psychology to undergraduates. To prepare for class, I would do my best to incorporate cultural and relevant examples of topics and processes to make them more relevant and relatable to my students, which got me thinking about the fundamental attribution error and its role in perpetuating privilege in all of its various forms.

The fundamental attribution error (FAE) is a topic covered early in social psychology courses. It’s covered early because it reveals a basic (fundamental, if I may) flaw in the way that people interpret the world. Briefly, the FAE refers to the tendency of people to assume that another person’s behavior is caused by something inherent about that person—their disposition, their personality, etc.—rather than taking the situational context in mind. Consider this scenario: you see someone you know walking toward you on the sidewalk. You smile and wave, but this person walks right past you without any acknowledgment. “How rude!” you think. I thought he was a nice person, but maybe I was wrong, you might conclude. If your thinking follows that pattern, then you just committed the FAE. In all likelihood, the person you knew probably just didn’t see you. His behavior was a function of the situation—maybe he was in a hurry—and not an indicator of who he is as a person. This type of example is often how the FAE is taught, particularly because social psychology studies the individual as its unit of analysis.

But the FAE has significant implications for privilege if you zoom out and examine its influence on a societal level. It relates to privilege because the groups of people who are likely to be oppressed and systematically discriminated against as a function of white (or male or any other type) of privilege are also likely to be victims of the FAE. One of the components of privilege is that you are not seen as an ambassador or a “token” of your group (see any of the links above). One man doesn’t speak for all men. One white person doesn’t speak for all white people. These examples seem obvious. Yet, people who fall outside of these privileged groups often carry the burden of being viewed as the sole representative of their group. If one black person speaks, that person is more likely to be seen as representative of all black people, which is an incredibly unfair responsibility.

Combined with the tendency of people to commit the FAE, you can see the problem. That is, if a black woman is treated unfairly at a checkout counter, and she responds in frustration or anger, the unfortunate consequence is that people are less likely to perceive and consider all the different factors in the situation. Rather than see this woman as someone who is reacting appropriately (or at the very least, justifiably) to her current experience, people are likely to make two assumptions: 1) decide that this woman is an angry and impatient person, and 2) extend that judgment to all black women, which helps to explain the trope of the “angry black woman.” The FAE contributes to the first assumption, and white privilege is responsible for the second. Because not only does white privilege inordinately and unfairly favor white people, it does so at the expense of people of color. Not only do white people get boosted up and given the benefit of the doubt, but people of color get pushed down further. Replace white with male, straight, or class, and people of color with female/trans, gay, or poor, and you get a staggering number of different biased scenarios**.

It’s not all bad news, however. Combating the FAE is possible, although it may require some effort. Those who don’t commit the FAE may simply be more empathic people, but they also tend to be people who know that the FAE exists. They understand how it works and are aware of the shortcomings of human perception. People who know about the FAE can work to pay more attention to situational factors that may explain someone’s behavior without jumping to the conclusion that an act is because of a person’s disposition. For an excellent example of how to do this, check out this video:

As for privilege, recognizing its existence is one of the first steps to not being complicit in it. I’m talking to those of you who fit in to some privileged group or another. Many of us do find ourselves in at least one group of privilege at some point in our lives—remember I’m speaking to you from my perspective of a white middle class person. No, we didn’t ask for this privilege. No, we don’t think it’s fair. No, it doesn’t matter that we think these things. Like the FAE, privilege is subtle and must be acknowledged as an initial step. Recognition is just the first step. We must pay attention to it and understand how it affects situational factors in our daily lives, and then take steps to correct that. It’s a lot to take on, but the weight is very little compared to what non-privileged folks must bear every day. Doing so is the only acceptable alternative if we want individuals to contribute collectively to true racial and social justice. If you’re not sure how or you’d like to learn more about privilege, start by reading any of these blogs below.

*I recognize that the fact that I can choose when I want to think about privilege is, in fact, another element of my white privilege. Not everyone has that luxury.

** I chose to focus on white privilege for two reasons: 1) As a white person, I’ve benefitted from and experienced white privilege all my life, and 2) the heart-wrenching and infuriating race-related events of the last few months, particularly in Ferguson, Missouri.