Should kids avoid the cereal aisle for their health? 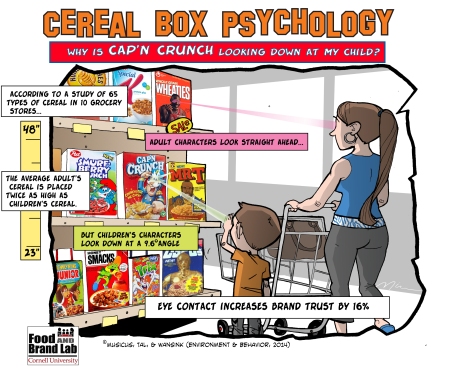 Is it just me, or is the cereal aisle much more complicated and sinister compared to when we were kids? Every time I walk down that aisle, my frustration spikes. The choices, so many choices! Chocolate Krave. Cap’n Crunch. Chocolate Cheerios. Frosted Flakes. Even Rocky Mountain Chocolate Factory has a cereal now, featuring chocolate bits that you can eat for breakfast. That last part is meant to pull in the kids, and it works. Those kids will nag their parents to buy it who will eventually give in[i] because, oh, they’re frustrated, too. Maybe even more than I am.

I’m not frustrated because of the mere existence of so many options necessarily. Rather, it’s the quality of the options that is concerning. Are any of these cereals actually healthy enough that children should be consuming them regularly? Not usually. A recent study on cereal quality found that cereal brands marketed to children had 56% more sugar, 52% less fiber, and 50% more sodium than cereals marketed to adults.[ii] Most of these cereals also feature spokes-characters, like the silly rabbit from Trix, Cap’n Crunch, or Tony the Tiger, which are familiar to children and increase the appeal of the cereal brand. And let’s not forget that the combined rate of obese and overweight children in this country is still holding strong at 17%.[iii] That’s nearly 13 million kids.

See what I mean about sinister? Now, brand marketing is not inherently negative, but when marketing of unhealthy foods is targeted toward children, then cereal companies like Kellogg and General Mills take a step into the danger zone. Sugary cereals are perhaps even more insidious than other snack foods because they are junk foods disguised as a friendly breakfast.

In-store marketing strategies take it one step further. Cereal companies pay top dollar to get an ideal shelf location that will appeal to children[iv]. In a recent study published in the journal Environment and Behavior, researchers found that cereal brands marketed to children were more likely to be at a child’s eye level and to contain spokes-characters whose gazes angled downward at approximately the height of an average child[v]. In contrast, cereals marketed primarily to adults featuring spokes-characters (think Wheaties) had level gazes. And this seemingly subtle shift in height and gaze is effective. People in the study reported a strong preference for the cereal that featured a spokes-character that made eye contact. By placing their cereals on the middle or bottom shelf, then, companies are ensuring that children will make eye contact with spokes-characters and feel connected and loyal to that brand.

This type of marketing exploits and manipulates children. Cereal companies should be held more accountable. In the past few years and in recent months, especially, there has been a serious push to create stricter regulations for companies that market primarily to children. Based on the findings of Musicus and colleagues, just one of many similar studies, these regulations can’t come soon enough. The issue of obesity is still current. People may be tired of hearing about it, and obesity rates may have stabilized in several states[vi], but that doesn’t mean that it’s gone away.

But even if we take obesity out of the equation, even if we recognize that not all children have the same risk factors for becoming obese, it doesn’t mean that kids should be regularly consuming unhealthy sugary food. Parents want to protect their children in every way they can, and they’re stretched to their limits as is. Cereal companies, and all other food companies for that matter, should be held to stricter regulations. Some marketing standards have been successfulvii, but more needs to be done. Regulations should stretch beyond nutrition and include specific marketing techniques, such as shelf placement and use of spokes-characters. We shouldn’t make the cereal aisle another battleground where parents need to be on the front lines.

If you’re interested in this topic and would like to learn more, check out the links below.

Center for Science in the Public Interest: Food Marketing Workgroup

Eyes in the aisles: Why is Cap’n Crunch looking down at my child? (abstract)