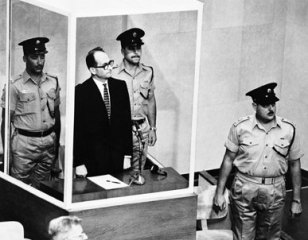 Image of Eichmann’s trial from the Daily Beast

“I was just following orders.” It is these famous words of Adolf Eichmann’s, uttered during his trial for crimes against humanity in 1961, that made Stanley Milgram’s career. Eichmann had been a high level Nazi officer, and was responsible for carrying out Hitler’s final solution by deporting millions of Jews to concentration camps. The world was shocked by the extent of the atrocities of the Third Reich, that the Nazis killed untold millions of people in response to the orders of an unhinged authoritarian leader. Stanley Milgram, the American son of Jewish immigrants, was born in 1933, around the time Hitler rose to power in Germany. By the time 1961 rolled around, Milgram was an assistant professor at Yale, and he had devised and begun his famous Obedience experiments. Milgram posited that authority figures may elicit an uncomfortable level of obedience from their subordinates, as evidenced by the German people getting swept up in a demagogue’s maniacal vision. He sought to prove that completely normal people could commit unspeakable acts against other humans, simply because they were following orders from an authority figure.

Allow me to set the scene. You arrive at Yale University in response to an ad in the New Haven newspaper. You figure you’ll make $4.50 on what has been described as a learning experiment. After being introduced to another man, you are randomly assigned to be the teacher and he is randomly assigned to be the learner. You both move into adjacent rooms. In front of you, there’s a big shiny box with 30 marked switches ranging from 15 volts to 450 volts. You come to find that the learner is hooked up to this machine in the other room. You are told to ask the learner a question and shock him if he gets the answer wrong. You are supposed to administer a higher voltage shock for each incorrect answer. You ask the first question. The learner is correct. You move on. But soon, he begins to be wrong quite a bit, and you are moving fast through the switches. 200 volts. Flick, buzz. 215 volts. Flick, buzz. Finally, you get to 300 volts. The learner is wrong. You flick the switch; you hear the buzz of the shock. Suddenly, you hear loud banging on the wall. The learner is trying to signal you. You look to the experimenter in the room with you. He seems unalarmed. He tells you to keep going.

Image of Milgram with his shock generator from Aeon

You put your finger on the 315-volt switch and ask your question. The learner is wrong again. You flip the switch. Flick, buzz. The learner bangs on the wall again, trying to signal you. Again, you turn towards the experimenter. You are told that it is imperative to the experiment that you continue. You ask another question. The learner is silent. You look to the experimenter. He tells you that no answer is the same as an incorrect answer. You flip the 330-volt switch. Flick, buzz. Silence. You look at the experimenter. At this point you are getting nervous. You start to sweat profusely. You’re laughing for some reason even though this is not funny at all. You suspect that you may be hurting the other man. You suspect that the other man may no longer be able to respond. But the experimenter tells you that you must continue, that you have no choice. And you do. Question, silence, flick, buzz. Question, silence, flick, buzz. You get to the last switch. 450 volts. It clearly says “Danger-Severe Shock.” You are shaking, completely beside yourself. You ask your last question. Silence again. You put your finger on the last switch. You flick it. You hear the buzz of the shock. You are so relieved it’s over. You’ve never been more disturbed by your own actions in your life. In the other room, you still hear nothing but silence.

When people hear about this experiment, they swear that they would never do this. They would stop as soon as the other man alerted them that he wanted to stop. But 65% of participants shocked the learner all the way until the highest voltage, even though he had failed to respond to 10 questions in a row after banging on the wall. Even though many subjects showed severe signs of distress and expressed concern that they might have hurt the learner, only 14 out of 40 stopped in between the learner’s first protest and the end of the experiment. Most participants were experiencing serious discomfort, but continued to do something they thought was hurting someone else simply because they were told to keep going by an authority figure.

Milgram’s findings even surprised himself. People he had polled doubted that anyone would go all the way to the end, generally estimating that just a few people would actually administer the final shock. But two-thirds of the participants were willing to act outside of their own personal values not to hurt other people, simply because the experimenter asked them to. They were paid up front and told that they could leave at any time without penalty. They were all grown men, not college students. They had never met the other man, a confederate of the experimenter who was never actually shocked, and they had no reason to inflict harm on him. In fact, most participants rated the confederate as being pretty pleasant. Why would people continue to go on when they could have stopped? Milgram had his answer. People are shockingly malleable when authorities are involved. They will often go along with things with little to no explanation as to why they are doing it, and then rationalize their own actions to themselves once they become uncomfortable. Because we don’t like to think of ourselves as bad people, we start to believe that what we are doing is okay. This is classic cognitive dissonance.

When Hitler rose to power in Germany, he did so by appealing to disillusioned Germans who were struggling to feed their families and blaming their struggles on the “impurity” of the Jewish people. He combined hopeful rhetoric about the glory of Germany with hateful rhetoric about how the Jews were responsible for Germany’s challenges. Within 12 years, Hitler had ordered the extermination of up to 6,000,000 innocent Jews. Hitler’s populist, xenophobic talk led to World War II and the largest genocide in the history of the world. The power of a single authority is enough to bring the whole world to its knees. And the men and women who helped Hitler carry out his atrocities? Well, they were just following orders.