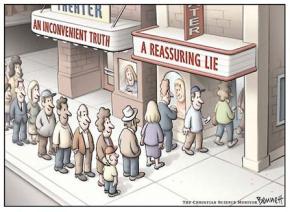 We saw the first debate between the two major party nominees for president this Monday, and critiques of the candidates’ performances flooded the internet. As with every debate, there are people declaring victory on both sides. Not only did their candidate win, but he/she mopped the floor with the other one! But political experts largely agree that Hillary Clinton won the debate, and polls of likely voters that were conducted offline show the majority of the electorate thinks Clinton won as well. So how do a bunch of people take some unscientific online polls and use them as real evidence that Trump won? Confirmation bias.

Confirmation bias is a tendency to seek out information that supports your position (hello .net web address!) and to interpret information in such a way that it confirms what you already think.1 Everyone is vulnerable to this bias. In fact, scientists regularly try to avoid having their a priori beliefs affect the later interpretation of their data through various techniques, like deciding sample size before looking at the results, or using a blind experimental design. They go through this trouble because we know that people tend to selectively expose themselves to information they agree with, and tend to ignore information they don’t agree with.1 That isn’t good science, and it isn’t the road to good decision-making either.

Thinking your biases are founded in fact can be extremely problematic and lead to overconfidence in judgments, such that you are more certain your judgment is correct than your evidence warrants.2 And if there’s something worse than someone who is wrong, it’s someone who is desperately trying to convince you they aren’t. Generally, if you look hard enough, you’re going to find something that assures you that you are right. Whether or not that something has any real merit is often another story.

2 thoughts on “Psych in Sum: Confirmation Bias in Politics”